skip to main | skip to sidebar

A new direction for OFS

Back in May, we packed up the truck and moved to Sequim WA, on the North Olympic Peninsula.  Since we are native north-westerners, it's great to be back home.  There were 2 objectives in this move, half the house and twice the sailboat.  In June, we moved into the slightly smaller house, and in December, we bought a bit more than twice the sailboat. The old one, which we still have is a 13.5 ft Enterprise sloop.  My dad bought it in about 1966 and sold it to me in 1972. It is a mahogany plywood boat that I will probably never sell. 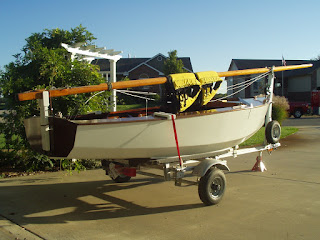 Our new boat is a 1978 Cape Dory 28 sloop, a very capable boat, perfect for the Strait of Juan de Fuca, Puget Sound and the waters of the Salish Sea. 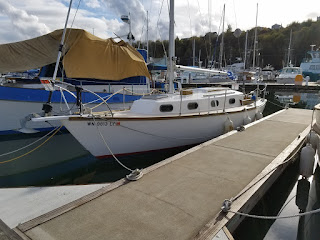 We've sailed her a few times so far this winter and are looking forward to the spring when things warm up a bit.

Actually, it is kind of inaccupuncture, since there really isn't any attempt to poke at particular neurological points in the body.  It's actually sort of random and all encompassing.  The most effective method is to fall over on top of a Cholla.  You can choose either the teddy bear or the staghorn, depending on your preference.
My option this time was the staghorn.  This is a fine example, not the one I chose. 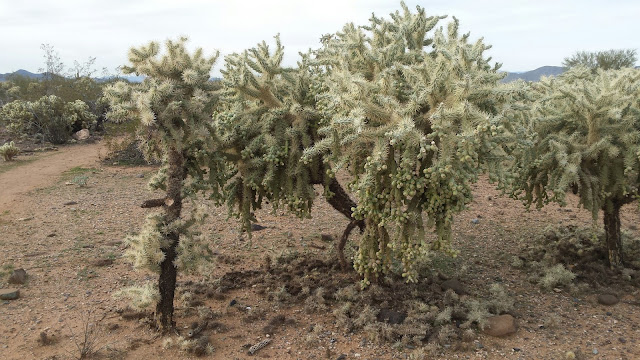 To give you a better idea, here's a section of a staghorn.

When you land on top of one of these, your next hour or two will be occupied with removing the needles.

I heard a suggestion on how to remove the smaller spines that you can't quite get with a pair of pliers that you of course have in your toolkit.  Spread wood glue over the area (something non-toxic like Elmer's), let it dry, then peel it off,  You'll also probably lose all the hair under the glue also.

Let's be clear about riding in the desert.  Everything out there wants you dead.  That includes rattlesnakes, gila monsters, spiders, scorpions, the weather, cacti, trees, bushes, you name it. Humans are intruders and nature doesn't like you in the desert.
Posted by Old Fat and Slow at 7:05 AM 1 comment:

If you aren't familiar with the trails in the Phoenix area, you may not know what this is. 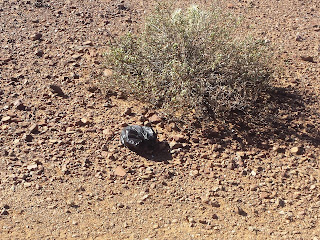 Believe it or not, it's a bag of dog poop. That's the sort of thing you leave on someone's front porch, set on fire, ring the doorbell and run like hell.

While riding trails in Phoenix and surrounding area, it is fairly common to find these bags on the side of trails.  They are usually green, but occasionally black, like this one.  Here's the deal.  The law here requires that trail users who bring their pets are required to remove the their pet's droppings.  The parks, HOA's and cities place pedestals at trail heads with free bags and a bin to dispose of the bags once they are used, along with instructions for use and disposal.

Occasionally, you will see a dog walker with an empty bag hanging out of one of his or her pockets. I doubt I have ever seen a dog walker with a bag of dog poop on the way back to the trail head.  More frequently the bags are left on the side of the trail.  The bags are biodegradable, but something tells me they actually slow the dog poop degradation process itself.  I often wonder what goes through the mind of the dog walker who leaves the bag on the trail;

Just one statement for the dog walkers out there, Pick up your dog's crap. You're the one who fed it!

I'm down $225 after last week.  My boss decided he didn't like his road bike and wanted to unload it. He put it on craigslist, asking $270.  I have been riding a Fuji Finest from the dark ages, 1998, that I swear was formed out of plumbing pipe.  The venerable old bike weighed in at almost 24 pounds, about 1 pound less than my ancient Klein mountain bike.  Since it seemed like a good price, I expressed some interest.  He brought it to the office and I took it home for the weekend.  His parting words were, "I was thinking I would go as low as $225."

Once I got home, I tried riding it.  Wouldn't shift to the large chain ring, Rear derailleur pretty screwed up, but overall in pretty good shape.  I spent a couple hours cleaning and tuning, then took it out for a 20 mile ride one morning.  It's now a reasonable road bike, although not new by any means.

To give you an idea of its age, it has a square taper bottom bracket.  Makes it at least 10 years old, but still newer than my Fuji.  It is an aluminum frame and the total weight is probably 21 pounds.  I could have spent more for a lighter bike, or I could eat less and cut more weight than the 21 it weighs. 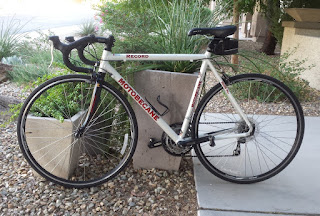 Last weekend we visited Prescott AZ for our 41st anniversary. Had a great time except for one thing.
The motel we stayed at The Motor Lodge ( I highly recommend it) had bikes that visitors could use. Judy has long held the idea that a tandem bike would be pretty cool, so we borrowed one to go to breakfast at a cafe called "The Local" (again, I highly recommend it).

Now, I've been riding bikes since I was about 4 years old, and I am comfortable on mountain and road bikes, spent years commuting by bike, and have been avidly mountain biking for over 20 years. Nothing prepared me for the balancing issues of 60 lbs of bike, and about 350 lbs (mostly me) of human. Couple that with a slightly kinked front rim and two very different types of riders and it made for more excitement than I would have chosen.

We made it to the cafe in one piece, had a nice breakfast, then headed back toward the motel.  about a block from the cafe there is a downward sloping right curve that we started coasting down just as a dump truck entered the curve going the same way.  No we didn't crash, but rounding that curve, wobbling all over and afraid to hit the brake with that kinked rim, was a life passing before my eyes moment.  Until the truck finished going by I was muttering, "F&$% F&$% F&$% F&$% F&$%!!" Muttering might not be the most descriptive verb I could use, but I'll just go with it.  With Judy behind me on the bike and the noise of the truck, I don't thing she heard any of it, although I did explain later.

As far as I'm concerned, that was the last time I ever get on a tandem for any reason, Period.
Posted by Old Fat and Slow at 9:22 AM No comments:

It's been a while since my last post, mainly because its been the same-old same-old. There have been some new trails opened up in the Sonoran Preserve and a trailhead/parking lot at Apache Wash on Dove Valley Rd.  The trails are really nice and worth a ride.

Anyway, the Old Klein Pulse Race, now 18 years old has started having some trouble, phantom shifts, skipping chain, that sort of thing.  I was on the verge of using it as an excuse to get a new bike, but being the cheapskate that I am, I opted for parts.  First, I replaced the chain, hoping that would fix the skipping. It actually made it worse.  I swapped that out with an old use chain that was better than the old one I had been using.  That made the skipping a little better, but still not good.  Out of my old crap box, I found a SRAM 8 speed cassette that I used once and didn't like because of the gear spacing, 11x34 with huge jumps between 1, 2, and 3.  It cured the skipping, so that meant the old cassette was worn on the three largest gears where all the skipping happened.  On to Amazon where I ordered a new 8 speed cassette with the largest was a 30.  Since I hadn't solved the phantom shift, which was dropping off the middle to the small chainring too often to keep me happy, I also ordered two chainrings 22 and 32.  THe big chainring hasn't caused any problems, so it stays on the bike.

The chainrings arrived in 2 days and I swapped them out in a twenty minute frenzy.  Presto! No more phantom shifts.  The cassette arrived a few days later and now all the problems are solved and my new bike is still just a dream.

Speaking of new, I replaced the suspension fork about a year ago with a sort of cheap Rock Shok.  Its heavier than the old Judy XC, which only lasted 17 years, but works ok.  In the world of strong, light and cheap, pick two, I opt for strong and cheap.  If I want to go faster, I'll need to work on the light with diet and exercise rather than dollars.

I got to thinking about what is still original on my ancient bike, so here it is:
Frame
Stem
Brakes (V brakes, of course the pads have been replaced several times)
Brake levers
Front and rear derailleurs
Seat post

It used to be, when I started riding in Phoenix that people would say, "You need a new bike." that was 8 years ago.  Now I hear, "Wow, that's a classic!" Crazy Joe gave me the perfect response, "No, it's just old.  I'm the classic."

Posted by Old Fat and Slow at 4:56 PM No comments: